Online Guide to the Engima


© Copyright 2013 by
the National Puzzlers' League

The first picture puzzles appeared in The Enigma only in August 1999, and therefore the rules are not yet hard and fast. Like some flat types, our picture puzzles were inspired by classical Italian puzzling. This article is a first attempt to define NPL guidelines for creating and solving picture puzzles.

There are two types of picture puzzles: picture rebuses, and illustrated flats. You can find more on Rebuses in the guide.

Picture rebuses differ significantly from standard rebuses. The figure, with letters, bigrams, and/or trigrams (rarely other typographical characters) added, is the rubric, and there is no verse. The typographical characters are “read” from left to right. If none are added to the figure, the rebus is “silent”, and is of course more elegant. In a silent rebus, a star may be used to focus the solver's attention on a part of the figure, though the artist may prefer subtler ways to reveal what is important.

A good rebus must satisfy “Briga's triangle”: plausible picture, clever reading, and meaningful solution. (Briga is a leading Italian puzzler.) In general, the picture should represent one single scene, not a random collection of objects. The reading should preferably be a reasonably coherent description of what is in the picture, and heteronymic to the solution (in the sense that word breaks should not be the same — in fact, etymological overlap between reading and solution should be avoided.) The answer should be a word or a meaningful phrase. It does not necessarily have to be an entry, but it cannot be an arbitrary sequence of words that one has to labor to justify (unlike standard rebuses, where this is not a problem, because of the context presented by the verse.) 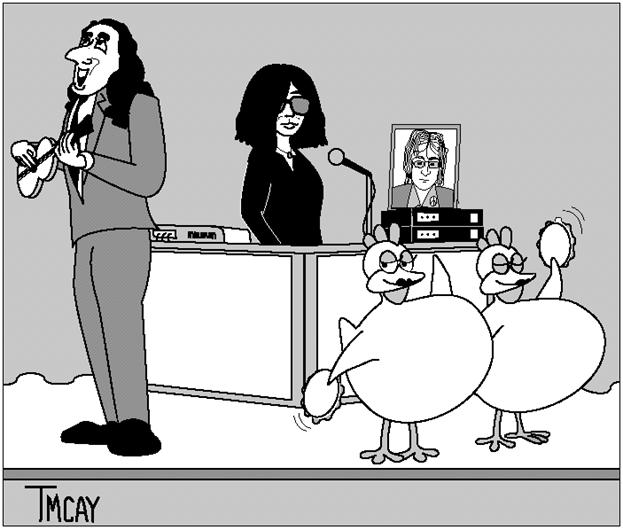 If there are letters in the figure, they are shown without asterisks in the first enumeration. 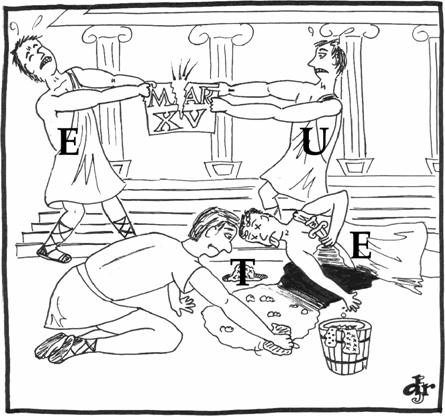 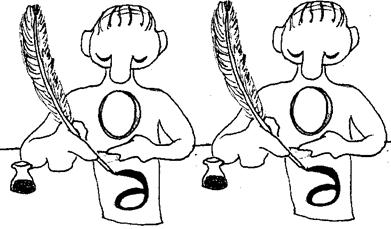 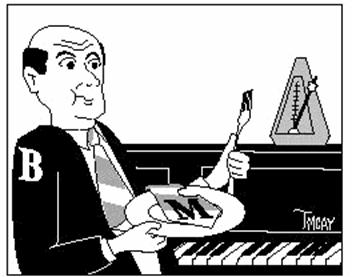 =FEDERICO
(drawing by T MCAY)
Solution: bee near nest —> be in earnest

Most flat types can be illustrated: the picture simply replaces the verse, and the rules about what bases are acceptable are the usual ones. Usually there are no cue words, though in some cases they might appear in dialog balloons, or on a poster or sign within the illustration.

The following example was originally a normal versified letter bank, but the concrete nature of the keywords makes it suitable for illustration: 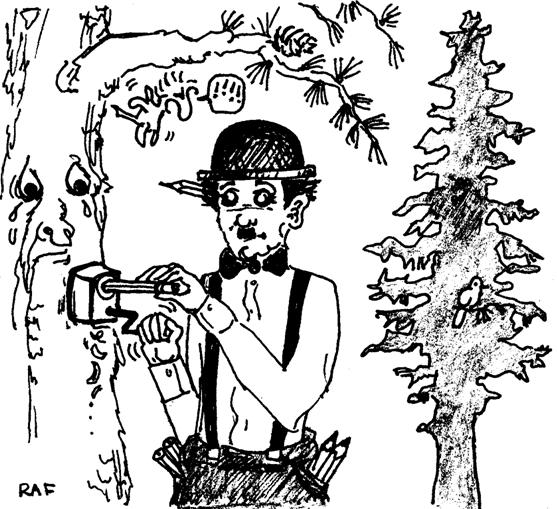 However a clever illustrator can find ways to illustrate more abstract keywords, and moreover those need not be limited to nouns.

Discovering illustratable bases is more difficult than finding versifiable bases, but most of the artistry is in conceiving and drawing the illustration. As in the picture rebus, it is best to use a coherent scene rather than an arbitrary collection of objects. This is similar to the preference for a meaningful story in a flat, rather than a meaningless juxtaposition of unrelated bits.

It is also possible to use the comic strip format:

Finally, the illustrated acrostical enigma (invented by Dandr) has its own rules. The letters (A, B, C...) in the illustration point to clues to words whose beginnings are the end of words clued elsewhere in the figure (but with no labels). For example, there may be an A on an elephant, and a B on an osteopath. Somewhere else in the figure there may be a TOWel, and ERos. So the first part of the final solution would be TOW and the last would be ER. Here is an example: 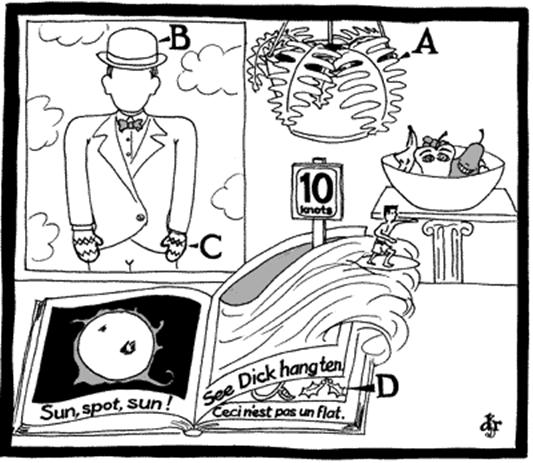 If there is a picture puzzle sub-editor, he or she is responsible for matching picture puzzle bases with artists. Send bases, and any ideas you have about illustrating them, to him or her. Of course, if you can illustrate your own ideas, or want to work directly with an artist, you are welcome to do so. (Still, you may want to run your idea past the sub-editor, just to make sure the puzzle is likely to be accepted for publication.) Conversely, if you can draw, and are willing to illustrate other people's bases, be sure to let the picture puzzle sub-editor know!

If there is no picture puzzle sub-editor, you should work directly with an artist. The editor will have a list of interested artists.